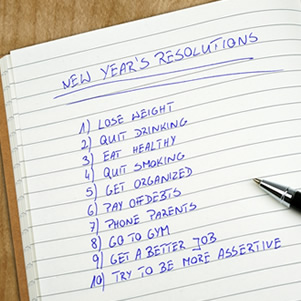 It is goal setting season! The New Year comes with clean slates, fresh starts, and a desire to change things that no other single global event does. I'm a fan! Always have been. I've learned that one of the biggest secrets to saying "Yes" to a goal is learning how to say a wholehearted "No!" We cannot say a successful "Yes" to our goals while also saying "Yes" to the distractions that keep us from them.  A "No" must exist in our hearts and on our lips if a "Yes" will ever be realized in our lives!  And these "No's" are not easy ones, which is why most New Years goals have long since been forgotten by February.
Want to say "Yes" to getting out of debt?  Then you better be well versed in frequently and consistently saying "No" to yourself, your spouse, your friends, and your kids.  And those "No's" will be said to some things that you really want or even think you need. But if you are serious about the "Yes's", then the "No's" have to be equally as determined.
Have you been trying to gain more margin in your schedule so you are less hurried, less stressed, and less stretched in 100 different directions?  Are you wanting to say a wholehearted "Yes" to things like peace, rest, extra time, breathing deeper, not being rushed, or having time to yourself? Then be ready to fire an arsenal of "No's" at some good things you would also like to be doing and experiencing.  Be ready to forgo that fun thing, that last minute thing, that don't have time but want to make time thing.  And be ready to say "No" to some well meaning people who are certainly going to "need" you to do some things for them, for the church, for the school, or for the family. Difficult "No's" lead to very rewarding and achieved "Yes's!"
Working to lose weight, stop smoking, eat healthier, or stop drinking so you can say "Yes" to better health?  I recommend a hearty ability to say "No" in several different languages and very early in the timeline to achieve these goals. Not going to the restaurant at all makes it easier to say "No" to the temptations that exist on the menu, as well as the portions delivered. Not purchasing the next pack of cigarettes makes it impossible to smoke them. Common sense? Perhaps! But frequent and early "No's" make for really good exercising of the "No" muscle, so achieving those "Yes" results is that much more likely.
Are you wanting to prioritize a relationship or two? Maybe spend more time with family or friends? Or strengthen your marriage? There will be any number of things that will compete with your time and rob you of these better more fulfilling relationships. Learning to recognize those distractions and say "No" to them is the key to deeper and better relationships. Some of those distractions will even be important events, occasions, or people. Saying "No" to important things so you can experience more important things is the gift that exists on the other side of a well said, "No."
I encourage you to say "Yes" to a few goals this year, but choose those goals wisely by asking yourself,"What am I willing and ready to say a wholehearted 'No' to?"