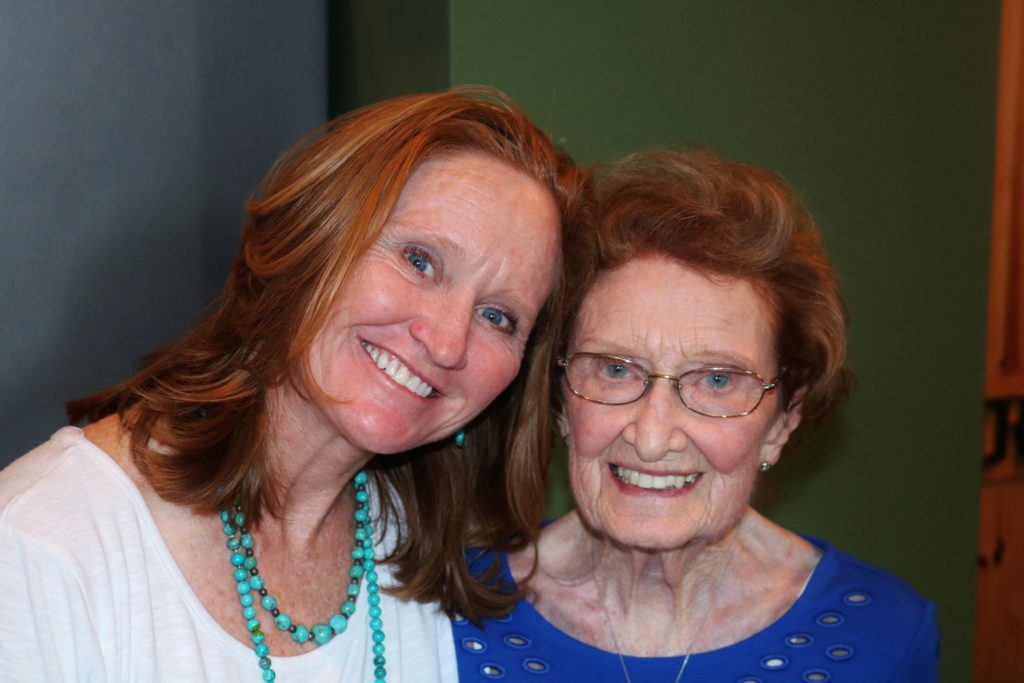 1. Life may not be fair but this women is.  Down to the sprinkles on our cupcakes whenever measurable we all got the same amount.

2. She has NEVER allowed any of her children to talk poorly to her about any of her other children.  “Don’t talk to me about my kids – go work it out yourselves.”

3. She loves her God with everything in her.

4.  Every Christmas at her house there are still 10 stockings hung and filled for her children.

5.  Every Christmas at her house there are still 37 stockings hung and filled for her grandchildren.

6.  If you are a friend or family member a card arrives in your mailbox on your birthday.  Without fail.

7.  She cares about people even if she has never met them.

8.  She loves and cusses at her OSU Cowboys.

9.  For 17 plus years she drove to the parking lot of an abortion clinic in Tulsa and just prayed.  For all the hearts involved she prayed.

10.  When I was 8 years old and wanted to play soccer there wasn’t anybody to coach so they told us we couldn’t have a team.  She bought a book, a ball, some cones and a whistle.  We had a team.

11.  At OSU Mom’s weekends, she danced on tables while her children stood by holding her purse.

14.  She still cooks dinner for “the seniors” at church.

15.  She befriends her children’s friends.

18.  She calls to check on her kids, grandkids and friends frequently.

19.  She updates the appearance of her home routinely.

21.  She initiates the change she desires to see in the world.

22.  Recently she received an award of recognition at her church.  She was embarrassed for getting an award for doing what she says she is supposed to be doing anyway.

25.  She fights for her independence.  Sometimes more than she should.

26.  When the boys were growing up she took the alligators off of Izod socks and sewed them onto dime store shirts.

27.  She doesn’t allow people to go through things alone.

29.  She has always prioritized her friendships.

30.  She makes a point to know her grandchildren and attend their activities.

32.  She has always tried different creative outlets and activities.

33.  She recently told me that she has never lost a friendship except to death.

34.  She consistently believes the best about people and the world.

35.  If you’ve ever hurt one of her children she probably holds a bit of a grudge.  She may not want to but she does.

36.  She has been present for all but one of her grandchildren’s births.  She was late for the first one.  Keep in mind however that she had a 3 year old and 6 year old as well as 4 other kids of her own still at home.

37.  She has literally held in her arms both of her parents, our friend Dave Wilkins, her husband and all three of her siblings as they passed away from this life.

38.  She loves to accomplish and learn things.

39.  She is proud of her country even when she doesn’t understand or agree with it’s government.

40.  She finds peace in being outside and loves the sound of running water.

42.  She has always said that she doesn’t look back and has no regrets.

43.  Her family is not just a priority to her.  We have been her purpose, her passion, and her vocation.

44.  Like Jesus in the parable, if there is one of us astray she will go after that one in prayer, with love until we return to the flock.

45.  Even when she doesn’t understand our endeavors she has always supported them.

46.  When we tease her about having a favorite she always responds, “I don’t have a favorite.  I don’t like any of you.”

47.  She lives out every single conviction she has to the fullest degree.

48.  She doesn’t expect anything from you that she isn’t willing to do herself.

49.  When students at Oklahoma A&M were asked to attend a meeting regarding black people being admitted for education she attended in wholehearted support.

50.  She broke up with another man to date my daddy.

51.  She stood next to me at my wedding as my Matron of Honor.

52.  She has never pretended to be anything other than exactly who God created her to be.

54.  She loves every one of her grandchildren as if they are the only one.

56.  She experiences blessings and loss with such grace that you might find yourself envying her strength.

57.  She is humble.  So humble you realize she has no idea how really amazing she is.

58.  She will still put me in my place or correct me if she sees it as needed or necessary.

59.  I prefer her company on most occasions, for any reason, no matter what I’m feeling.

61.  She loves and treats her children’s spouses as though they were her own.

62.  She is both classy and comfortable.

63.  She will honk and shake her finger at you if she catches you littering.

64.  Because I was still single I received an Easter basket until I was 38 years old.

66.  In 2001 I decided to go to Ireland and run a marathon.  She and Daddy decided they should be at the finish line.  They were.

68.  Every year we call each other at the first sign of snow because we both love it.  One year I was out of the country and she saved a snowball in the freezer until I got home.

69.  She is big on manners and taught them well.

70.  She likes both adventure and stability.

71.  She feels strongly about the right things

72.  I’ve never seen her act as though anybody is better than her.

73.  I’ve never seen her act as though anybody is beneath her.

74.  I’ve never seen any evidence that she cares much about what other people think of her.

75.  I had a minor surgery a few years ago and she came to stay with me for a few days to help with recovery.  I woke up from a nap to find her, at 88 years old, outside picking up limbs in my yard.

77.  She knows where all of the good things in her life have come from and not for one minute does she believe it has anything to do with her work or her efforts.

78.  She always gives people the benefit of the doubt.

79.  She creates special memories on purpose because she wants people to know that they matter to her.

80.  She is really tough and rarely complains.

81.  She listens more than she talks.

82.  She has allowed each of her children the freedom to become who they were created to be not who she wanted or needed them to be.

83.  If we are performing, playing a sport, getting an award or having an event she is sitting front and center in full support.  If she can be there she will be.

84.  She decorates every nook and cranny of her house for Christmas.

85.  Every year she still has each of us over for our birthdays and cooks our favorite childhood meal.

86.  Every Monday and Wednesday when I get off of work she talks to me for my entire 45 minute drive home.

87.  When she had her hip replaced in her 80’s she worked diligently to get back to a place where she could physically care for herself and others.

88.  She recently went to a friends funeral an hour early so that she could get the closest parking spot and work her way up the churches many steps to be on time.

89.  When her house caught on fire this year and she had to move from a home she had lived in for 57 years.  She never once mentioned what she had lost.  Only what she had gained.

90.  The 4 boys who rescued her from that fire are now on her mind, on her daily prayer list, and in her heart as her own.

91.  Throughout my life, nobody has loved me with the same intentional passion and absolute determined purpose and consistency than the woman I get to call “Mom.”